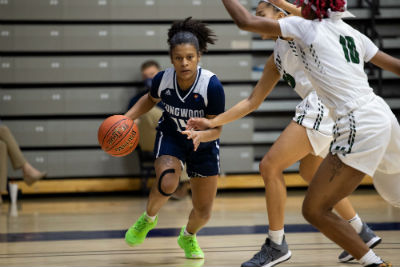 The highlight saw the Lancer point guard showing off her veteran savvy in crunchtime, bouncing an inbounds pass from the baseline off a USC Upstate defender, collecting it and taking it to the basket for a go-ahead layup. Longwood went on to win 54-52 to sweep the Spartans in the two-game series and improve to 4-2 in Big South play.

The win was also the Lancers’ fifth straight in Willett Hall and lifted the team to fourth place in the Big South standings. Longwood (5-6, 4-2 Big South) will continue its climb this Saturday and Sunday with a two-game road trip to Campbell.

A native of Madisonville, Texas, and a preseason watch list selection for the prestigious Lieberman Award for the nation’s top point guard, Smith is the 10th Lancer to appear on the ESPN SportsCenter Top 10 since Longwood joined the Big South in 2012-13. The most recent of those was softball player Madison Blair in March of 2020, while others include Kaylynn ‘Bug’ Batten (softball), Tristan Carey (men’s basketball), Emilie Kupsov (women’s soccer), Emily Murphy (softball), Janese Quick (women’s soccer), JaShaun Smith (men’s basketball), Jessica Smith (softball) and Lucas Woodhouse (men’s basketball).