Olyvia Hoban remembers her first interview with the University of Calgary Dinos. She was 16 years old and halfway through grade 11 at her Calgary high school. As a relatively new fan of the game, she had just recently acquired the football bug.

She remembers being asked what she’d like to do with the Dinos.

“I said ‘I don’t really know. I know I need to work in football and that’s all I know. Teach me everything.’”

Now, at 19 years old, the University of Calgary fine arts student will undoubtedly utter that last sentence again, at the BC Lions’ 2022 training camp. There will be lots to learn as she takes up a temporary role as an assistant equipment manager with the Lions and she is game.

“I’m very excited,” said Hoban, after having just arrived in Kamloops, the site of BC’s camp. “I’m very thankful for the opportunity. I’m very eager and keen to see how they do things here.”

Hoban, an equipment assistant with the Dinos and equipment manager with the Calgary Rage of the Western Women’s Canadian Football League, is one of nine candidates who’ve been selected for the Women In Football Program Presented by KPMG. She will spend the next few weeks sponging up both the atmosphere and the lessons while continuing to forge her future in the sport that burst into her life just a few years ago.

Hoban remembers how she came to strike up a relationship with the game of football. At the age of 14, she had no interest in it, really. But one day, in looking for something to watch, she came across the show ‘Last Chance U,’ the American documentary series that focused on the challenges of junior football programs and the players trying to grind their way to a Division I team.

“I watched the show and was like, ‘Yeah, you can make a career out of working in sports. Sign me up,’” she said. “To see that you can work in athletics and still have a career but not necessarily being the athlete itself? That really spoke to me.

“I knew I wanted this,” said Hoban of the inspiration she’d drawn from the series, and the energy she immediately felt around the sport of football. “I’ve loved it since. And so I’ve just been working my butt off since then. I’m proud to say that I’ve been with a college team for four seasons now. I’m the head equipment manager for a women’s team. I’m now working in pro. So I’ve really worked hard since the moment that I knew that you could make a job out of this.”

When Hoban asked to be taught everything at that first interview, Dinos’ academic and administrative coordinator Kevin Tonak asked the 16-year-old how she’d feel about being a part of the equipment crew.
Hoban snapped it up. It’s gone well and her passion shows when she says, “it’s my favourite thing to do in the world, fixing equipment.” 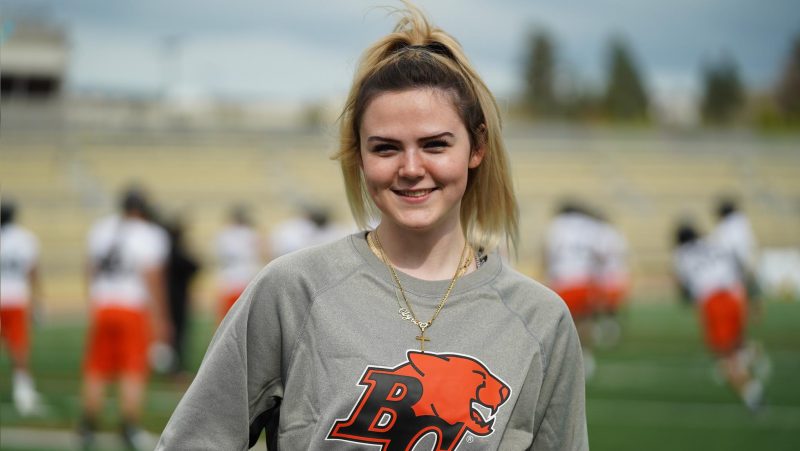 As she heads into her fourth season as assistant equipment manager with the Dinos, Hoban is also about six months into her second football job as equipment manager for the Rage. Considering that she is simultaneously advancing towards her university degree with a major in dance, her dedication and workload speak loudly. “I always find a way to make it work,” she said. “I do what I gotta do and this is my passion.”

Hoban is eagerly anticipating the work ahead. She knows exactly what she wants to do in football and that is to be as good an equipment manager as she possibly can. With that in mind, she looks forward to seeing the differences between the equipment world she has known and the one she is about to enter at the pro football level.

“We only work with two (different) helmets, we have only a couple of styles of shoulder pads that we offer,” Hoban said of the Dinos and Rage. “So I’m I’m wanting to learn what it’s like over here. How do they accommodate to the players differently? What else is there for equipment?

“I can only Google so much about equipment,” she added with a laugh, “so I’m excited to just see new things.”

Hoban is happy being with the Dinos and the Rage. But one day? “I would definitely love to go pro eventually,” she said. “It’s definitely a goal.”

She’ll take another step on the way to her goal at BC Lions’ training camp.