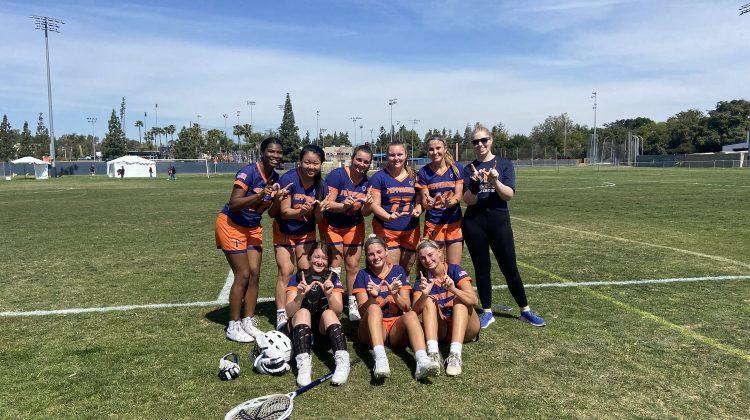 Pepperdine’s Women Lacrosse Team poses for a team picture March 13, 2022 on Cal State Fullerton’s soccer field. Senior Peyton Lee said during the club fair of fall semester 2018, the head coach of the lacrosse team asked her if she was interested in joining the team, and she decided to give it a shot. Photo courtesy of Peyton Lee

As Pepperdine students adjust to the various stresses of college life, students find community through the club sports program.

Club sports differs from intramural sports since club sports teams travel and compete against other universities. Students can find flyers for club sports throughout campus and contact the Coordinator of Recreational Sports Julian Baker, the head coaches or team captains if they’re interested.

“We like to tell our athletes, ‘We understand that you’re not going to try most likely to become a professional in your sport,’” Baker said. “But at the same time, it’s not just a random hobby. You do have a passion or a love for whatever sport [you’re] are involved with.”

In the spring semester, the club sports in season include the surf team, club tennis, women’s lacrosse, rugby and Esports, Baker said.

Both senior Women’s Lacrosse captain Peyton Lee and senior Men’s Rugby captain Aaron Barnhouse said they picked up their respective sports when they came to Pepperdine and found that club sports offer a good competitive balance.

Though students can bond over club sports, intramural sports are also offered throughout the year and the two are sometimes confused with each other.

“In both club and intramural sports, students create the team and run the leagues, which run throughout the semester,” Baker said. “Intramural sports are open to staff and faculty, whereas club sports are restricted to student involvement.”

Baker said one of the biggest differences between club sports and intramural sports is the level of competition.

“If someone was an athlete in high school and want to get back at it –– it’s a great level of commitment,” Lee said. “It’s a great way to meet people and stay active. This is a level of competitiveness I wish I played in college.”

For intramural sports, Pepperdine offers flag football and volleyball in the fall semester. The basketball and soccer league run throughout the spring.

How to Get Started

Baker said the Campus Rec staff spread the word at the beginning of the fall and spring semesters to encourage students to try out. Spots are always open for athletes because some students will be graduating and going abroad, Baker said.

In terms of funding, Baker said players pay a certain amount at the start of the season –– which will continue to be separate from the wellness fee. For example, those interested in playing rugby have to pay $250 before the season starts. Baker said these fees cover various costs such as coaching and registration fees.

“If teams are ready to travel, [the fees] covers the uniforms, equipment — kind of just basics,” Baker said.

Though Pepperdine offers these activities, Barnhouse said the school doesn’t allocate much money toward club sports.

“[Pepperdine] kind of leaves it up to the students to deal with it,” Barnhouse said. “There are people in charge of helping and [Campus Rec] does a great job. They put in the effort, and they tried to help where they can. It’s just it’s difficult when [Pepperdine is] not giving them support.”

In terms of resources, Barnhouse said that a big trouble with club sports is the condition of the fields they compete on.

“It’s difficult when we’re looking around [and] there’s a soccer field that we’ve asked play on and we’re not allowed to do that because only soccer can do that,” Barnhouse said. “And there’s always like other fields that are just not kept up to shape.”

Lee said one area Pepperdine can improve their support is to be willing to listen to their concerns.

“We were told that [Pepperdine] would try and fix Alumni [Park] in time for our season and [Pepperdine] didn’t –– and so that’s been kind of a challenge too,” Lee said. “We’re really in the back of their minds.”

Despite the challenges, Barnhouse said club sports are a good way of relieving stress and improving mental health.

“It’s a way of making connections and you make new friends,” Barnhouse said. “With rugby, there’s 15 people who are on the field at a time, so you instantly have like 20 other friends that you have a connection with. There’s instantly 20 guys that you’re like, ‘OK, there’s someone there. These are people that I can like turn to.’”

Lee said balancing the friend and teammate role is challenging at times.

Barnhouse said with rugby –– playing time is determined through effort and easily distributed to those who demonstrate effort and passion.

Barnhouse said there’s a benefit of trying to find something that you love at Pepperdine.

“There’s not a full-on commitment,” Barnhouse said. “There’s everything to gain but nothing to lose. You can make a good group of friends, find a new sport that you may love. And even if you feel like you’re not athletic, if you’re just interested in it 100%, try it because you may find a really good fit for you.”