AMELIA ISLAND, Fla. — Jim Phillips put a public bow on his first spring meetings as ACC commissioner Wednesday, meeting with reporters at the Ritz-Carlton a day early before heading to the Chicago area Thursday for his son’s graduation from Notre Dame.

No, Phillips did not gift Luke — a sprinter on the Irish’s track and field team — news of his school joining his father’s conference full-time in football. That conversation is barely even a conversation anymore, with both sides having long made their stances clear and with so many other pressing issues for the league address amid a climate of change in college sports.

Here are the four biggest direct topics that Phillips hit on during his nearly 40-minute session with the media.

1. Does college football need the NCAA?

Phillips, who sits on the NCAA’s transformation committee, was asked a question about whether he envisions a break-off by the Power 5 conferences from the NCAA. The short answer was no. The longer answer left open the possibility of FBS football doing its own thing, given the size and scope of the sport relative to the limited reach of the NCAA.

Phillips comments were not all that different from those of Ohio State athletic director Gene Smith, who proposed to ESPN last week that the FBS should operate under the umbrella of the College Football Playoff. Phillips was asked specifically if he agreed with Smith.

“I would just say we’ve had lots of conversations, I think inside the ACC and outside the ACC, of what you just described,” Phillips said.

Asked what those alternative models are, Phillips said: “Well, I think you either continue to go down the road that you’ve been on, or you try to do something different. And what’s most sustainable? What has the opportunity to help the sport of football moving forward? There’s been a slow creep already with football. It has its own championship. It has all the things necessary to run the second-most watched sporting event in the United States. And so, is there an opportunity to potentially look at what that may be? If you’re going to redo the NCAA and all that the NCAA cares for, maybe there’s something parallel that can have some interaction but has some standalone ability to it.”

One can only wait for the SEC spring meetings in Destin, Fla., later this month to hear commissioner Greg Sankey’s thoughts on the topic, as Sankey is also on the transformation committee and has been very vocal in his thoughts on the current state of the NCAA. 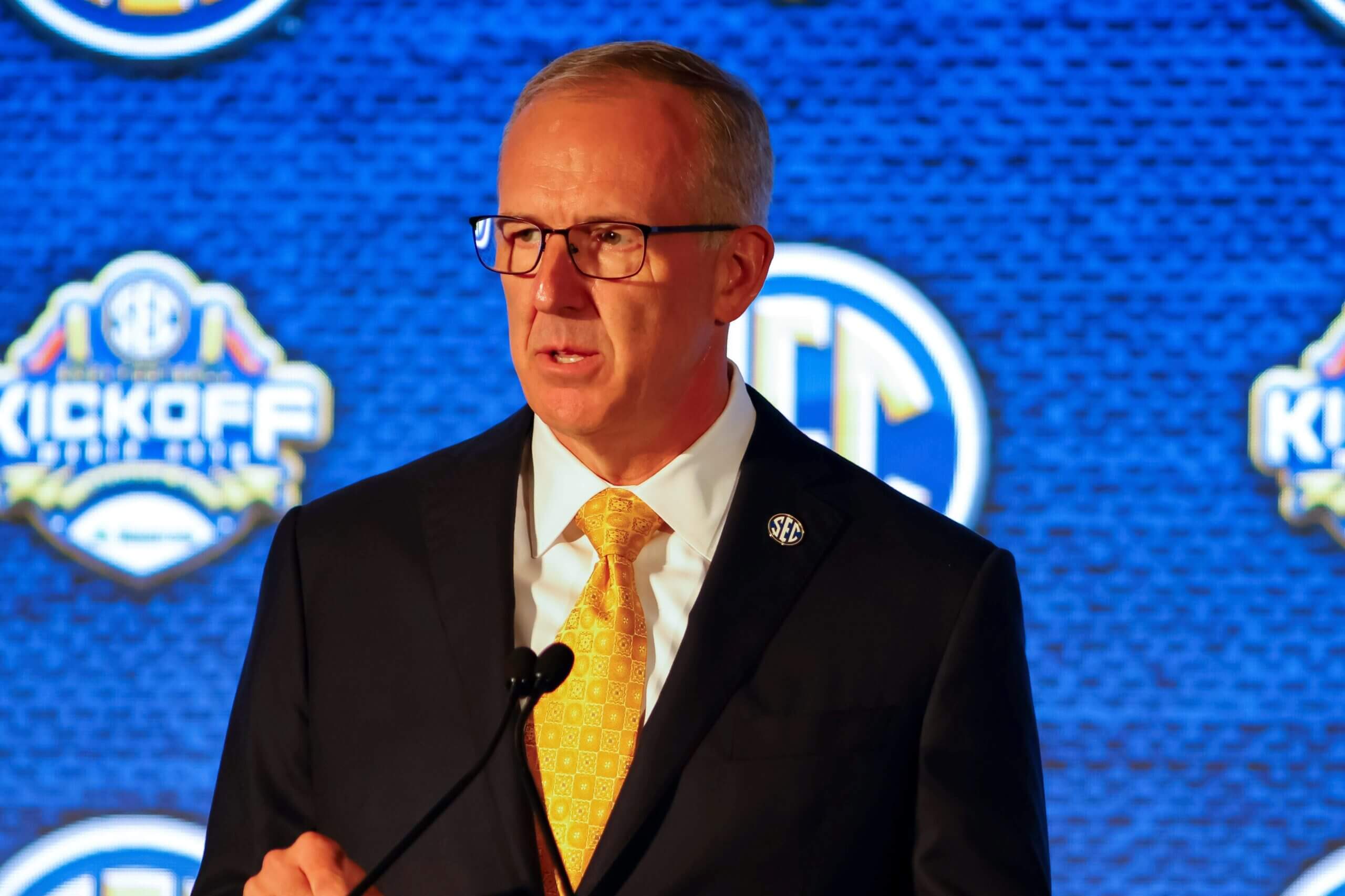 Everyone who spoke both publicly and privately this week sounded in favor of the ACC changing it scheduling model to ensure that every four-year player gets to play every conference school during his time on campus. Phillips confirmed that the 3-5-5 model — in which schools have three permanent annual opponents and a rotating cast of five every year — will be the model that the league eventually votes on.

“This would be in 2023 and beyond,” Phillps said. “So we again really want to be thoughtful and strategic, listen to the coaches and garner their feedback. Have the ADs weigh in on it. But in the end, we also want to talk to our partner, and that’s kind of the last step. What does that do from a television standpoint? Is that something that’s attractive for ESPN? And we’ll decide whether we want to do it or not, but we’d like to get their input as well.”

Phillips pointed to two main drivers for the potential move: the aforementioned familiarity aspect, and the recommendation from the NCAA Football Oversight Committee that would essentially allow conferences the authority to stage their championship games as they see fit.

“I think you’re seeing that across multiple conferences, that they’d like to to dictate what their championship structure looks like, and which will lead into eventually an expanded football playoff,” Phillips said. “You want your two best teams to have a chance to play at the end of the year for a lot of reasons. So that’s why it’s taken us — you may think it’s a little bit longer, but it really isn’t. It just isn’t. And it’s not like, ‘Oh, well we couldn’t make a decision.’ We’re really very much on track, but again, want to make sure we’ve talked to everybody to see: Are we missing something here?”

3. A decision on HQ is imminent

We’ve all heard this one before, but this time the ACC sounds like it means it. The league had better mean it, for the sake of all of its office employees who need to know if and where they might be moving in the next few months.

Phillips said he wants the ACC’s relocation decision to be done by the end of this spring, which would be within the next few weeks. He confirmed that three locations are finalists, but he would not get into specifics after being asked about potential political implications of a move to Orlando, given that the ACC had removed its football title game from Charlotte in 2016 because of House Bill 2, which became known as the “Bathroom Bill.” (Florida recently passed H.B. 1557, which has become known as the “Don’t Say Gay” bill.)

Charlotte, Greensboro and Orlando have been widely reported as the finalists for ACC HQ.

“There’s no position for me to answer, we haven’t made a decision,” Phillips said. “We are looking at everything, though, with each of the three cities. Everything that’s involved with a particular city, location, dynamics of that city, legislation. So we’re not ignoring anything from any of the potential venues that could host and be the home of the ACC.”

The ACC announced in October that it was looking into relocation. It has been based in Greensboro since the conference’s founding in 1953.

One option that has been discussed and is very much on the table is a move within Greensboro to a more modern facility downtown.

4. How does the ACC close the revenue gap?

The Big Ten is closing in on a massive deal with its next media rights agreement. The SEC has its own megadeal with ESPN that starts in 2024-25 and pays that conference $3 billion across 10 years.

The gap is only growing. What can the new commissioner do to play catch up?

“It’s top of mind,” Phillips said. “I think we have to do a better job with revenue within the conference office, and I think you’ll see a Chief Revenue Officer at some point be part of our our new structure after we find our new location, whether we stay in Greensboro and another facility in Greensboro or we go to two of the other finalists. So the overall organization needs to have somebody each and every day thinking about revenue. We talked with ESPN at length today about some really, I think, high-level opportunities from a sponsorship standpoint to help generate, and they’re as motivated as we are because we’re 50-50 partners. So we’re going to have to continue to find every way that we can resource the conference, championships and locations of championships and the rest of it.

“We also are a conference that next year will sponsor as many (sports) in any of the major conferences, and besides the Ivys, I think we’ll be right at the top with 28. Women’s gymnastics will be added at Clemson, it will be the 28th that we’ve sponsored. That’s been in the bloodlines and the DNA of the ACC for as long as the ACC has been around.

“And so moments like (when a reporter) was asking about with Title IX, that matters in the ACC and those student-athletes matter. And so we believe in broad-based programming and there’s a cost to doing that. And we want to address that and close that as often and as quickly as we can. But I’d also say at the same time, just because you have the most money doesn’t mean you win all the time, either, depending on whatever sport you look at. And that’s not an excuse not to try to close the revenue gap, but I also know that we’ve done a really good job in our schools of taking the resources that they’ve had and using them to have success.”