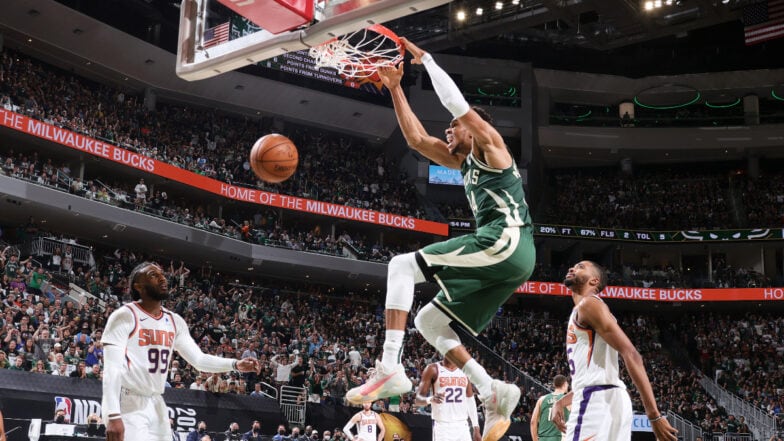 Giannis Antetokounmpo joins Shaq as the only players to post 40+ points and 10+ rebounds in consecutive Finals games.

Two days off. A change of venue. It’s Game 3 of the 2021 NBA Finals from Fiserv Forum in Milwaukee. Can Milwaukee get back into this series? Can Phoenix keep the “Suns in Four” hopes alive by getting a win on the road?

1 — Is being back home the answer for the Bucks? They are 7-1 at home and two key players — Khris Middleton and Jrue Holiday — have played much better at Fiserv Forum this postseason. The Bucks’ season isn’t technically on the line since this isn’t an elimination game, but this is as close to a must win as you can get. As a reminder, no team has ever overcome an 0-3 deficit in the history of the NBA playoffs.

The Bucks have taken it up a notch at home this postseason.@malika_andrews joins @CassidyHubbarth on #HoopStreams to break down what home court means to Milwaukee and also chats with Giannis Antetokounmpo to talk about his leadership. pic.twitter.com/6igkXeo9Zf

2 — Giannis setting up his teammates early — assists on Milwaukee’s first two baskets, including the opening bucket of the game — a corner 3 by Jrue Holiday, who the Bucks need to get going in this series.

3 — Giannis getting his points as well — grabs the offensive rebound over Devin Booker, gets the putback, and-1. A few Suns fans in attendance counted during Giannis’ free-throw attempts, but it was drowned out by cheers as Giannis knocks it down.

Giannis gets on the glass for the And-1 early in Game 3 on ABC! 😤#NBAFinals presented by YouTube TV pic.twitter.com/kTboMoBNfY

4 — After making that free throw, Giannis signals to the bench to be subbed out just 3 1/2 minutes into the game. No doctors come to him on bench, just a quick trip into the tunnel, seems to be okay. Bucks fans can exhale.

Giannis Antetokounmpo has checked out of the game three minutes in and has walked back into the hallway heading back to Milwaukee’s locker room and back out to the bench. Appears he’s fine, though.

5 — Deandre Ayton with a strong start for the Suns with a quick six points, two boards and steal in the game’s first six minutes.

Ayton with a jump hook over Connaughton – up to 8 points

Ayton has Holiday defending him, pinned him in the paint and got an easy layup — he’s got 10 of Phoenix’s 18 points

Monty Williams’ Game 2 counsel for Deandre Ayton is still sparking him in Game 3.

Suns zipping the ball around and up five late in the first.

6 — Another ball movement clinic from Phoenix leads to a Jae Crowder 3-pointer. The Suns have six assists and are shooting 63% to start the game. Strong start on the road.

Cam to Cam to Book to Jae for 3 on ABC! #NBAFinals pic.twitter.com/PzoYNOOU08

7 — I mean if Chance the Rapper is going to show up to any game during The Finals it makes sense for it to be Game 3. Match the hat with the game ticket.

.@chancetherapper is in the crowd for Game 3️⃣ pic.twitter.com/fLyC7w6tH5

8 — Suns lead 28-25 at the end of the first quarter. The Suns are 12-1 this postseason when either tied or leading after 1st quarter; 3-2 when trailing. And they’ve done it with Devin Booker shooting just 1-for-7.

Deandre Ayton in the 1st quarter:

9 — Bucks force back-to-back turnovers to open the second quarter and take a 30-28 lead as Middleton gets to the basket for the layup and-1, earns his first trip to the free throw line for the series with 11 minutes left in the second quarter of Game 3.

Was not expecting Jeff Van Gundy to bring up Joseph Brodsky while discussing pick-and-roll schemes pic.twitter.com/Mn9yQqsHy1

Speaking of Ayton, who is having a great first half, have to five a shout out on this jacket choice.

11 — PJ Tucker has made a few great hustle plays in the first half, including this one as he rebounds the Brook Lopez airball and finds a cutting Giannis for the huge dunk to force a Suns timeout.

12 — The Bucks are rolling in the second quarter, they’re on a 20-6 run to take an eight-point lead and force another Suns timeout.

Giannis in Game 2 and Game 3 is basically telling us to bring in the construction crew, blow the roof out and raise whatever we thought his ceiling was. This is ridiculous ridiculous stuff.

13 — The “Bob-by, Bob-by, Bob-by” chants have broken out in Fiserv Forum as Bobby Portis increase the Bucks lead to 10 with a dunk, then to 13 with a triple.

Jrue behind the back.
Middleton drop-off.
Portis slam.

These final few minutes of the first half have been the difference in both Games 1 and 2. Phoenix made a big push and put the game away both times. Bucks are trying to do the same thing in reverse here in Game 3.

This end-to-end sequence highlights a 30-9 @Bucks run to close the 1st half on ABC! 🔥 #NBAFinals pic.twitter.com/F9IRC0I9iV

Bucks lead it 60-45 at the half 👀 pic.twitter.com/lYftHRNHRC

Suns had gone 171 minutes, 32 seconds without trailing by 15 points or more, until the Bucks got there late in the first half tonight.

15 — After the Suns score the first four points of the half, Deandre Ayton picks up his fourth foul and heads to the bench. The Suns go small with Cam Johnson replacing Ayton, show some zone defense.

Cam Johnson with a head of steam, gets the pass and elevates as Tucker tries to establish position for the charge. It’s called a block, but Milwaukee challenges the call.

all this challenge is doing is giving the refs the pleasure of watching that dunk over and over.

If that’s a charge the block/charge rule must be abolished.

NBA Twitter will count that dunk forever no matter what the review says. https://t.co/H5xcxQacwk

I can’t believe Mark Jackson didn’t go with “mama, there goes that Cam”

17 — Suns are making a run to get back into this. They scored seven straight to cut the lead to six (69-63), but Jrue Holiday answered with a three. In Game 2, the Suns had an answer for every Bucks run. Can the Bucks do the same here and hold off a Suns rally?

Cam Johnson with the finesse this time.. he’s got 10 quick in the 3Q.@Suns 70@Bucks 74#NBAFinals on ABC pic.twitter.com/CIslwVJqL6

18 — A big downside of going small and playing zone, the Suns are getting eaten alive by the Bucks on the offensive glass.

Giannis with another putback bucket for Milwaukee, grabs his own miss, hits the layup, plus the foul, and of course, sinks the free throw. Bucks up 16, their largest lead of the series.

The Bucks arena when Giannis is shooting free throws pic.twitter.com/DJCmDbCbK0

how Bucks fans should count while Giannis is at the free throw line pic.twitter.com/ua4H7q3s9F

21 — The Suns shot 12-for-19 from the field and knocked down four 3-pointers in the third quarter, but saw their deficit increase from 15 points to 22 points as the Bucks close the third on a 16-0 run.

16 in the quarter.
34 in the game.
The. Greek. Freak.#NBAFinals on ABC pic.twitter.com/rsFsHbZOde

Giannis, Jrue, and Khris have scored or assisted on 96 of Milwaukee’s 98 points through 3 quarters.

Giannis with 34 points, 12 rebounds and six assists through three quarters. He joins some elite company with that feat.

22 — Chris Paul with the crossover on Giannis and hits the fade-away jumper over Giannis outstretched arm. Incredible play, but it won’t be enough tonight. “Suns in Four” had a great run, but it’s not going to happen this time around.

23 — Giannis now has back-to-back Finals games with 40+ points and 10+ rebounds, joining Shaq as the only  players to accomplish that feat in The Finals. Also first time for Giannis in his career (regular season or playoffs). The game is essentially over at this point, all that’s left to be determined is the final score.

Giannis now has back-to-back 40-point games for the first time in his 8-year NBA career. He’s bringing it.

Giannis Antetokounmpo’s 1 turnover represents the fewest by a player with 40-10-5 in a Finals game since turnovers were first tracked in 1977-78. pic.twitter.com/Wcz1w0bVFg

Kirk Goldsberry with the stat of the night:

The message after Game 2: Giannis needs help. The message coming out of Game 3: Giannis got help.

After both games of during the season series were decided by one point (both Suns wins), each game in The Finals has been decided by double digits. But look at that composite score: Suns 336, Bucks 333.

Game 4 is set for Wednesday. I don’t know who needs the two days rest more: the players or the Bucks fans, who were going crazy all night long both inside and outside the arena.

25,000 strong in the Deer District. pic.twitter.com/qoxlEbXaUY